Gulargambone’s ghosts of Bullock Teams past 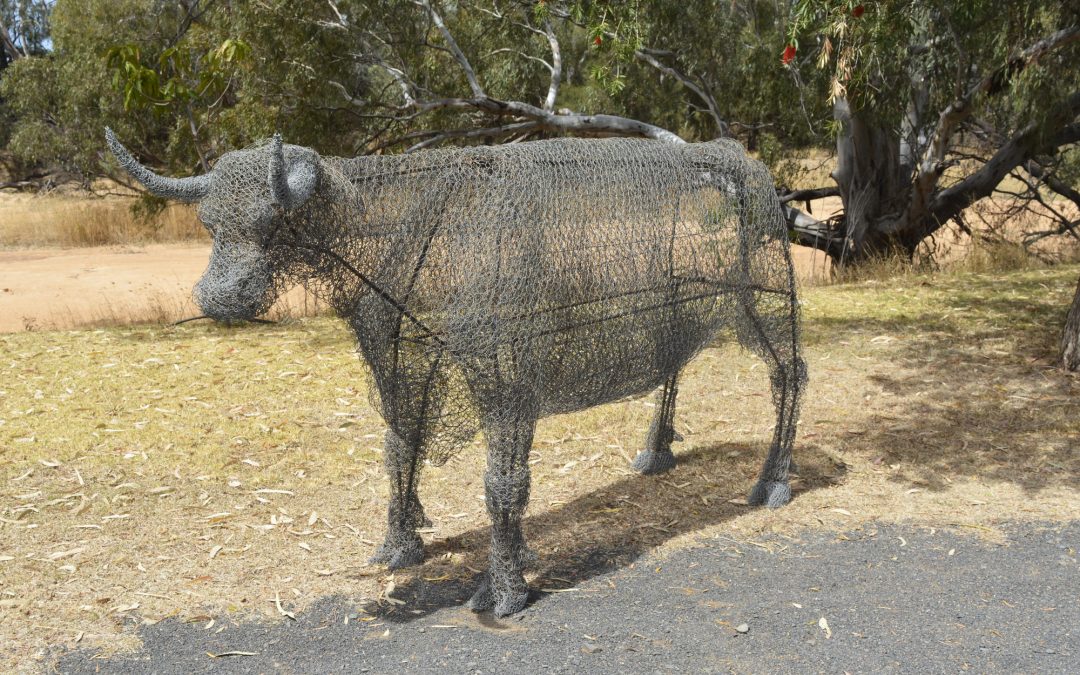 A NEW artistic project is on the road for Gulargambone.

Having witnessed the impact of the corrugated galahs designed by artist Sam Newstead and installed along the highway as part of an earlier ‘town branding project’, the ever-inventive Gulargambone community has come up with a few new ideas to bring visitors and business to their town.

One of these projects is an interactive sculptural installation re-creating what would have once been a familiar scene in the district with a wagon-load of wool pulled by half a dozen bullocks.

The project is being organised by the Gulargambone Community Enterprises Co-op, which was formed when the service station closed in the township and was instrumental in getting a fuel outlet back into the community. In their search for artistic concepts to develop as a community arts and tourism initiative, they called on local artist Alison Dent.

Her proposal involved an original bullock wagon loaded with wool bales, complete with bullocks and bullocky.
The decision to use wire and netting came a little later.

After coming up short on sourcing a local wagon, they finally found one on e-bay that is not quite as large as a bullock wagon as it was pulled by horses.

This means that the scale of the scene will be adjusted but the overall effect will be the same. The wagon has already been delivered from Melbourne to Gulargambone by a truck from Perth on a run to Brisbane.

Mrs Dent says they got a good deal on the freight and the wagon is “better than we expected.”

Importantly, the wagon has four original wheels in good condition and a solid body. To protect the wagon from decay the proposal is to secure it to a concrete slab and the Co-op have approached Council for a contribution towards this cost.

When it came to the construction of the bullocks, the organizing team approached former rodeo rider, steel merchant and artist Brian Campbell.

Brian is known for his drawing and caricatures, but has worked in many different mediums over the years and is always experimenting with new materials.

As he’d only ever sculpted in clay, Brian wasn’t keen to make any promises about a whole bullock team, but the idea hooked his imagination and he hesitantly agreed to give a trial wire sculpture a go.

Less than two weeks later a steel, wire and netting beast 1.5metres tall and 2.6metres long was standing on the riverbank at the Campbell’s block just south of Coonamble.  “I did it very much not knowing what to do,” said Mr Campbell. “I couldn’t see anyone on the internet actually doing it, so I just had to work it out.” “Things happen, and you learn as you go,” he said.

This involved developing his own methods for shaping the netting and creating the tools to do it, including a tortured-looking screwdriver and a hefty lump of wood.

Mr Campbell’s lifetime of experience with livestock has equipped him to deliver a unique work of art.
“The attention to detail is incredible – the nose, the cloven hooves, the bangs at the end of the tail,” said Mrs Dent. “You can see the character already,” she said.  “It’s ethereal, which really suits this project and the by-gone days subject.”

There will be six bullocks in all, each with individual features and poses. “Everyone will be quite different,” said Mr Campbell. “They’ll be different sizes, and all have their own character.”  “I’m going to model a couple off Bill Corby’s bullocks Frosty and Jolly.”

The organisers hope that the installation can occur on the vacant site at the top of Bourbah Street on the Castlereagh Highway which has the Gulargambone Creek as a backdrop.

The installation will be interactive, steps will be built to allow observers climb onto the two lead bullocks for photo opportunities, along with the bullocky his long whip in the air staged for imitation. They are just waiting on the necessary Council approvals.

Some of the finer details are still to be developed. For instance, it is hoped that the Gulargambone Men’s Shed can help create the timber yokes and collars along with welded chains.

The whole project needs to take account of public safety and to secure the work from vandalism, which will add another level of complexity to the artistic process. “We need to think about how to deal with that,” said Mr Campbell.

While Brian has “always” been drawing, sculpting with clay, and burning pictures on everything from timber and leather to watercolour paper he is still coming to terms with calling himself an artist.
“I’ve been waiting all my life to settle down to art,” he said.
Mr Campbell has put the call out for wire netting and some bird netting in reasonable condition (not too rusted) to create the six bullocks, wool bales and the character of the bullocky.

Article and Photo Courtesy of the Coonamble times